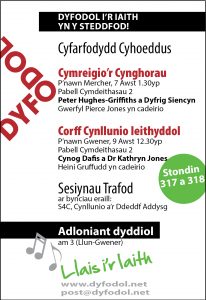 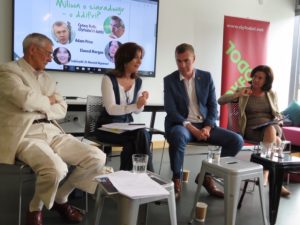 Thank you to all who attended our public meeting at Yr Egin in Caermarthen on Saturday morning, 25th May. It was wonderful to see such a large audience for this important and timely discussion on the next steps to reaching the target of a million Welsh-speakers by 2050. We were pleased to welcome Eluned Morgan, the Welsh Language Minister, Adam Price, Leader of Plaid Cymru, and to hear their response to our position, which was represented by Cynog Dafis. We would also like to thank Dr Mererid Hopwood for chairing the meeting and facilitating  a clear and balanced discussion. 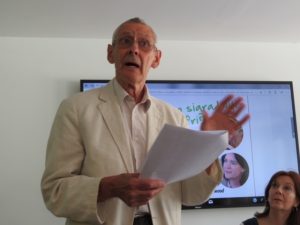 As you are no doubt aware, we firmly believe that powerful new structures are urgently needed to support and achieve the fundamental shift towards the growth of the Welsh language. Speaking on behalf of Dyfodol, Cynog Dafis argued that we now need a robust Language Planning Agency  to lead the work of restoring Welsh as a national language. “The agency,” he said, “could be either as an arms-length body or as a prominent and influential unit within the Welsh Government.” The current structures he noted, were entirely unfit for purpose.

As the discussion developed, it became clear that there was a consensus regarding the need to shift the policy emphasis to a comprehensive language planning approach, while still protecting Welsh-speakers’ rights. This, of course is the very kind of balanced and holistic approach that Dyfodol has advocated from the outset. 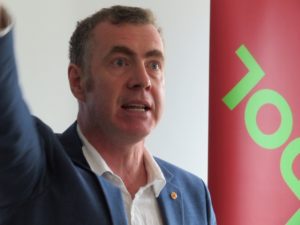 Adam Price outlined three priorities for reaching a million speakers. In addition to the Arfor project addressing the the economic opportunities and challenges in the language’s heartlands and looking into the advantages of a Welsh Education Act, he also committed to a Welsh Language Agency. Setting up this Agency would be among the priorities of a Plaid Cymru Government’s first 100 days. 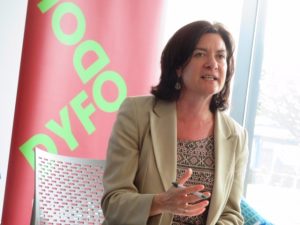 Speaking on behalf of the Government, Eluned Morgan said that necessary changes were now under consideration. She was not in favour of an additional arms’ length body, but a Welsh Language Agency within the Civil Service, with the power to influence policy across Government departments and answerable to the Minister was an option under consideration.

There was an opportunity to extend the discussion following the panel presentations. Among the matters raised by the audience were the need to gain wide support for the language, the pressing need for more Welsh-medium teachers, the role of the Mentrau Iaith and the need to address town and country planning issues. It became clear from the diversity and urgency of the subjects raised that there was a need for political will, resources and a clear allocation of responsibilities to push ahead with the agenda.

At the end of the positive and successful meeting, Heini Gruffudd, Dyfodol’s Chair said, “The consensus in this well-attended meeting was strongly in favour of establishing a powerful Agency to drive forward the strategy for restoring Welsh as a national language, with the Commissioner remaining in charge of strengthening services to Welsh-speakers. The Welsh Government must now get on with putting this house in order and ensure the financial resources necessary to achieve this ambitious target”. 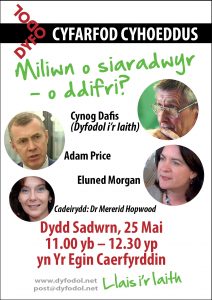 As we all know, the Welsh Government has set a target of creating a million Welsh speakers by 2050. But what exactly is the strategy for reaching this ambitious aim? What needs to be done now to set the work on track?

Since the Welsh Language Bill, the original plan for reaching the target, has been abandoned, what alternatives need to be put in place if the Government is to achieve its aim? Can we seriously expect progress without fundamental changes to the existing structures and ideas?

Dyfodol i’r Iaith believes that these questions must be addressed if the Welsh language is to thrive, and this public meeting will be an opportunity to ask politicians how best to proceed with this essential and urgent work.

The panel will include the Welsh Language Minister, Eluned Morgan; the Leader of Plaid Cymru, Adam Price; Cynog Davis of Dyfodol’s Board and Dr Mererid Hopwood will chair the discussion. The meeting is free of charge and a warm welcome is extended to all. If you are passionate or passionately worried about the future of the language, then please call in at Yr Egin on Saturday morning, 25th May between 11.00 and 12.30; we look forward to meeting you!