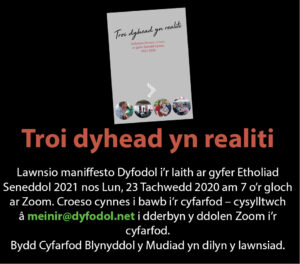 Heini Gruffudd, Chair of Dyfodol i’r Iaith, said, “We have for many years seen the Welsh language as an area of responsibility of a Minister who is under great pressure from other directions.

“Carwyn Jones as First Minister had, in fairness,  shouldered the burden of the Welsh language, but it was impossible for him to give priority to the language.  Then came Brexit and now Covid-19 and related health issues.  It is not possible for all matters associated with the Welsh language to have a fair hearing in such a situation.

“We were promised by the Government that the Welsh language department would become an influential body within the Government.  There has been silence since then.

“Dyfodol i’r Iaith has consistently called for a National Authority to co-ordinate language planning in Wales across all areas of government responsibilities.  We want the Language Authority to be independent of the whims of government.  The marginal attention given to Welsh in the Government’s arrangements proves the need for an arm’s length Linguistic Planning Authority.  It is essential that it can liais with a  Minister who will be able to give all his or her attention to the Welsh language.

“Covid-19 has caused a crisis for Welsh-speaking communities, and for the cultural life of the Welsh language.  We need a National Language Authority that will have  resources and power to co-ordinate and stimulate the regeneration of the language. And we need a Welsh Language Minister who will be able to give this his or her whole attention.”

Dyfodol i’r Iaith is calling upon the local authorities of Gwynedd and Môn to review the target noted in their current Local Development Plan to build 7,184 new homes up to 2026.

The Development Plan was drawn up within the context of the future development of Wylfa atomic power station. Following the announcement that this plan will not be going ahead, Dyfodol believes that it is essential to review these building targets which are by now superfluous to local need.

“From the start, we were convinced that the Local Development Plan included building targets that were totally unsuitable for the area, and by now, there can surely be no justification in following a framework that is not only unsustainable, but which also threatens the Welsh language as a social medium.

We therefore call for an urgent review of the Local Development Plan, with priority being given to local needs – both economically and linguistically. Emphasis should be placed upon sustainable energy and supporting local businesses.”