A great opportunity for someone who wishes a bright future for the Welsh language. Get in touch with ruth Richards on 01248 811 798 0r 07879 529180 for an informal discussion. Please note that Welsh language fluency is essential to this post 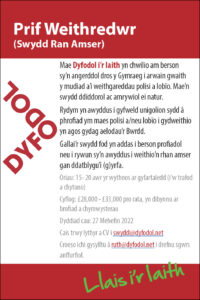 We are pleased to announce our presentation for this year’s Eisteddfod and are delighted that Dr Elin Jones has agreed to discuss the rich relationship between Wales and its language from the perspective of the past and looking into the future. The event will take place on the Eisteddfod Maes at Pabell y Cymdeithasau 1 at 1pm on Wednsday, August 3rd. Make a note of the date and we look forward to the presentation!

“Following the success of her ground-breaking book, Hanes yn y Tir, Dr Elin Jones will be discussing her findings regarding the central importance of the Welsh language to Wales’s history. The book shows how the history of Wales has formed the landscape, and her lecture will outline how the Welsh language is also interwoven with our history. From our place names to our personal names, from key concepts to the days of the week, our history is embedded in the words we speak, our history is in our language, the past in our words – and the future of that language is now in our hands.”

Dyfodol i’r Iaith has written to the Deputy Minister for Climate Change, Lee Waters, regarding the need to plant woodland for carbon capture within the context of protecting rural communities that support Welsh as a community language.

The organisation was pleased to learn the Welsh Government accepts the principle that it is local farmers, rather than outside companies, who should be central to responding to the challenge of carbon capture through increasing the plantation of trees.

Dyfodol believes, however, that specific and robust commitments are needed in relation to this critical challenge, and calls upon the Government to:

“This is clearly a matter that emphasises the need for Government to tackle two elements of sustainability that are central to its vision: ensuring a future for the planet and those communities in rural Wales who live on it.”