We are extremely grateful to Castell Howell Foods, Cross Hands, Carmarthenshire, for their donation of £250 towards our fundraising evening with ‘Tri Gog a Hwntw’ from Llanuwchllyn, held recently at the Quins Rugby Club Carmarthen.

The group from Llanuwchllyn provided an entertaining and fun-packed evening of song. Many thanks to the group for travelling all the way to Carmarthenshire and thanks also to all who supported the evening. It also provided an opportunity to raise funds and draw attention to our work. Many thanks to all. 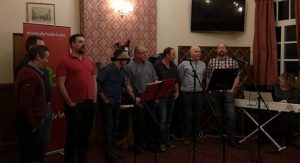 “A linguistic disaster” is how Dyfodol i’r Iaith describes the Government’s decision not to proceed with establishing a Commission for the Welsh language.

“The Government has wasted seven years by not promoting the language properly,” says Heini Gruffudd, Chair of Dyfodol i’r Iaith, “but they are now refusing to take the next necessary step to plan the future of the Welsh language according to recognized principles. ”

“Urgent plans are needed to strengthen the Welsh language in homes, and to strengthen Welsh-speaking communities, and to foster Welsh in the world of technology, but no-one takes responsibility for the whole picture.”

“The Government’s destructive ideas, such as making English compulsory in Welsh playgroups, prove how clueless the Government is regarding language planning.”

“We call on the Government to create an internal Welsh language planning body, if it is not willing to create an arm’s length body, to lead on basic linguistic issues. The need for language experts, rather than politicians,  to lead on this is obvious.”

Dyfodol i’r Iaith is calling for significant investment in a language training programme for teachers.

The call comes following the announcement of education Minister Kirsty Williams that Welsh second language will no longer be offered.

Heini Gruffudd, Chairman of Dyfodol i’r Iaith, says: “We welcome the Minister’s announcement, but there must be an intense program of language training for thousands of teachers.”

“Currently, Welsh-medium schools that teach subjects through the medium of Welsh are the only model that successfully gives equal language skills in Welsh and English to every pupil.”

“Teaching Welsh as a subject is not enough – other subjects must be taught through the medium of Welsh. Wales’ schools will not be able to do this without a large increase in the number of teachers of Welsh with a qualification in the language, and a significant increase in the number of subject teachers who can teach through the medium of the language. ”

“We have to follow the Basque Country pattern, where a huge investment was made in ensuring that teachers have sufficient linguistic skills. Without doing this, there is a danger that the Minister’s hopes will be vain hopes. ”

“We are therefore calling on the Government to introduce an extensive programme of language training for thousands of teachers.”