This will be the theme of a Public Meeting at the Cottage Inn, near Llandeilo on Monday the 26th March at 7 p.m. The speakers are the broadcaster, Elinor Jones, Heini Gruffudd (Chair, Dyfodol i’r Iaith), and Cynog Dafis(former MP and presently Dyfodol i’r Iaith Board member),

This meeting is part of Dyfodol’s programme to hold public meetings across Wales. One aim of these meetings is to gain information from local communities; what helps the Welsh language locally? What are the challenges?

Another aim is to present how Dyfodol I’r Iaith wish to see things develop. We want to prioritise the promotion of the Welsh language in the community, the home and the workplace, so that Welsh speakers are given the opportunity to use the language.

Currently, and perhaps for the last half century, the emphasis has been on gaining status for the language and the rights of the individual. We must now change the emphasis to concentrate on creating opportunities for Welsh speakers to use the language.

Since its foundation 5 years ago, Dyfodol i’r Iaith has seen many of its recommendations accepted, including:

The next major step will be for the Welsh government to establish a body with responsibility for leading on language planning and promotion. This is the theme of a white paper recently produced by the government, and we hope to see this body established by 2020.

The major theme for the next 20 years will be to see more Welsh speakers, and just as importantly, to facilitate opportunities for people to use the language.

This cannot happen without careful planning and creative action. Neither can it come about under the current situation, where political changes can disrupt plans, and local authorities and other bodies remain complacent.

As a lobbying group, which influences government, Dyfodol i’r Iaith public support and attracting new members will naturally be another aim of this meeting.

We look forward to working together powerfully and creatively. 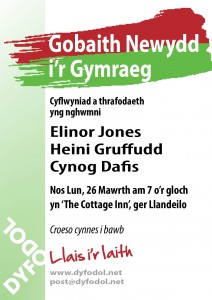