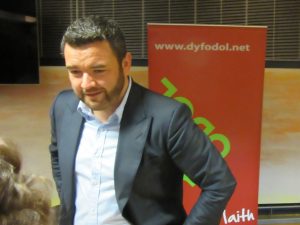 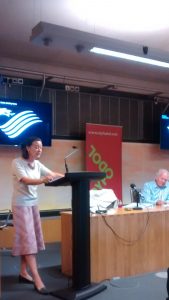 We hope you all enjoyed this year’s Eisteddfod in Cardiff Bay, and a warm thank you to all who attended our presentations. We hope you appreciated the content, and that you were given plenty of food for thought. We include below a summary of both presentations:

The principles of language planning must be incorporated into the planning system. The current situation is weak, and the Government is currently on the wrong track. Although the Planning Act (Wales) of 2015 took a step in the right direction in accepting the Welsh Language as a material consideration, much remains to be done.

These are Gwion Lewis’s main recommendations:

Local planning already happens at the level of Local Developmant Plans, but this is on a wide scale. Another layer is needed, with the main decisions, such as the number of homes remaining the responsibilty of Local Authorities, but the decision over their location falling upon Community Councils (or an equivalent body).

More local power would ultimately empower communities to define the kind and mix of housing that would be most appropriate. Local Authorities do not have the resources to concentrate on local needs, and a more devolved system would allow better dialogue with developers, particularly as they are keen to avoid the cost of going to appeal. This situation would give communities more bargaining in setting favourable conditions in relation to the Welsh language and the kind of infrastructure to support it.

Areas with a special environmental designation call for a complex approach and detailed assessment in relation to planning. There is no equivalent designation for the Welsh language – in Wales, the bottle-nosed dolphin is more protected than the language. There is therefore a need to press for the designation of areas of linguistic importance, and for the Welsh Language Commissioner to be given the power and expertise to advise on schemes for such areas.

Although the language is noted as a ‘material consideration’ in the 2015 Welsh Planning Act, the Technical Advice Note 20 prepared in relation to the language undermines this and works against any attempt at language planning. It notes that an assessment of the linguistic implications of planning applications should not normally be undertaken, except for large applications and applications falling outside the Local Development Plan.

This situation limits the protection of the language, undermines the law, and is not applicable to any developments beyond housing

The latest plans are broadly based upon the Welfare of Future Generations Act, and more specifically on the aim to create a million Welsh-speakers by 2050. It was also noted that Brexit is a further factor and a threat

At the end of her presentation, questions were put to the Minister, and a summary of her responses follows: