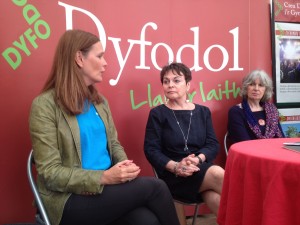 Thank you again to all who contributed to a successful Eisteddfod for Dyfodol; speakers, entertainers and visitors to our stall. A summary is provided below of all our presentations and discussions during the Eisteddfod …

REGENERATING THE WELSH LANGUAGE IN THE SOUTH-EAST

That was the message delivered by Helen Prosser , one of the chief officers of the National Teaching Welsh to Adults Centre to a meeting arranged by Dyfodol i’r Iaith at the Eisteddfod.

Discussing her own personal story, Helen said that that she had the ideal resources to enable her use the language as a student at Aberystwyth, and, she was immersed in the Welsh language

We need to create the right conditions to support learners, and give them the opportunity to use the language within their communities.

One of the main challenges facing the new Centre will be to coax learners out of the comfort of the classroom and become part of an existing or new Welsh-speaking community.

The new Centre will raise the profile of Welsh for Adults, and this has already begun. The Centre will also encourage intensive learning courses, using recent technology to increase contact with the language, although the emphasis will always be on the use of Welsh within the community.

The Centre will also place an emphasis on learning Welsh in the workplace.

With the establishment of a National Centre, it will now be possible to start discussions with the Local Government Association and S4C regarding the promotion of teaching Welsh for Adults.

According to a survey of its economic impact, Merthyr Tudful’s Welsh Language Centre contributes £1.3 million to the local economy. Lis McClean, the Centre’s Chief Officer, said that contributing the local economy was one of the Centre’s original aims; in addition to developing the use of the Welsh language in the community.

The Centre has received £32.5 million. 20 people are employed, and it welcomes 32,000 visitors annually.

The Centre has a shop, a bookshop, which is about to open, classrooms, and a crèche. One of its main achievements has been the conversion of an old chapel into a performance space.

Although the Centre mainly concentrates on the Welsh language, it also contributes to other events within the community; thus drawing a new audience and demographic to the language

Lis said that establishing social networks was an important part of the Centre’s role. The Urdd, Mudiad Meithrin, and Welsh for Adults all meet there.

The aim is to be a powerhouse for the Welsh language, offering learning facilities, and expanding upon this to offer opportunities for people to use the language. 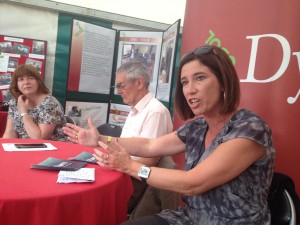 This is a critical time for Welsh language education, and a time when challenges must be met and opportunities exploited. The conclusions of the Donaldson process recommended a linguistic continuum, rejecting the concept of Welsh as a second language. With Pioneer Schools, clear coordination is essential to ensure the importance of the Welsh language within the curriculum. With the failure of Welsh in Education Strategic Plans, the next steps have to be analysed and challenged.

The new Welsh Government have appointed a new Minister for the Welsh language and a new arrangement whereby he also has responsibility over Welsh language education. Cooperation between the Minister and the Education Secretary will therefore be of key importance if progress is to be made. As the discussion began, the Welsh Government had made a statement that they wish to ensure a million Welsh speakers by 2050. What therefore would be the role of Welsh language education in reaching this goal?

With the establishment of the National Centre for Learning Welsh as a body with responsibility for all aspects of Welsh for Adults, it is hoped that consistency will be ensured, and that duplication and extra costs can be avoided. At the start, the new body faces several challenges; specifically financial, while securing the most effective provision for the future.

A clear priority will be the need to collect robust data regarding the skills and demographics of learners, in order to establish a baseline for future planning. Another consideration will be balancing the need to increase fluency amongst learners, while reaching out to the highest number. Another area which is being developed are bridging schemes (working with different communities) and further research into informal learning and the use of technology.

On the day of the discussion, it was announced that Radio Cymru’r listening figures had decreased since last summer. Although the decrease (1,000 listeners) was disappointing, it can also be argued that the channel is holding its ground. The figures and the current situation is difficult to analyse, as no clear pattern seems to be emerging. However, it would appear that the morning programmes are the most popular, that Radio 2’s listening figures are on the increase, and that this poses the greatest threat to Radio Cymru.

This discussion took place as Radio Cymru is about to embark on its fortieth birthday experiment; with an alternative channel available for a temporary period. The intention is not to compete with the channel’s current output, but rather to experiment with new developments and foster new talent for the future

Following Dyfodol i’r iaith’s lobbying, Welsh Language Centres have received the support of the Welsh Government. As an organisation, we are enthusiastic about their potential to form networks, and become powerhouses for the Welsh language. We must accept of course that every Centre is different, and that they must respond to the specific needs of their different communities. The purpose of this discussion was to identify the needs in relation to their development and how best the unlock their potential