The Welsh language must be completely central in planning – that was the clear message that emerged in the Annual General Meeting of Dyfodol i’r Iaith (A Future for the Language) in Aberystwyth on 23rd November.

Dyfodol called for strengthening the new TAN20 to include individual developments as well as the unitary development plans of local authorities. “It is also evident that planning inspectors need language awareness training to understand the context and importance of the Welsh language in the social fabric of communities in Wales” said Dyfodol’s President, Bethan Jones Parry. “I was astounded to hear that not a single planning appeal in Carmarthenshire was refused on the grounds of the Welsh language,” said Ms Jones Parry. “This proves clearly that planning inspectors do not understand the significance of the Welsh language in our communities.”

Dyfodol is also calling for the Welsh language to be an integral part of the new Planning Measure when it is published in order for the language to be a statutory consideration in presenting planning applications. 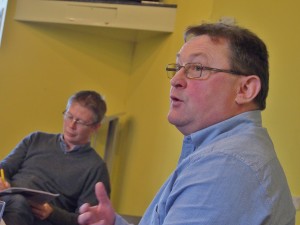 At the meeting Catrin Alun and Judith Humphreys were elected as new directors and Simon Brooks, Heini Gruffudd a Huw Edwards were unanimously re-elected.