Over sixty members and supporters gathered in Aberystwyth today for the first general meeting of the language organisation Dyfodol.  Bethan Jones Parry was elected unopposed as the first President of the organisation.

In addition ten members were elected to be directors and will operate as the Executive Committee. The ten are: Heini Gruffudd, Simon Brooks, Elin Walker Jones, Elin Wyn, Emyr Lewis, Eifion Lloyd Jones, Meirion LLywelyn, Richard Wyn Jones, Huw Ll. Edwards, and Angharad Mair. Heini Gruffudd will be Chair of the Board.

It was also agreed that Myrddin ap Dafydd, Cynog Dafis, Angharad Dafis and Robat Gruffudd are designated core members. The organisation will not be able to change its objective of working for the Welsh language without the agreement of the core members. 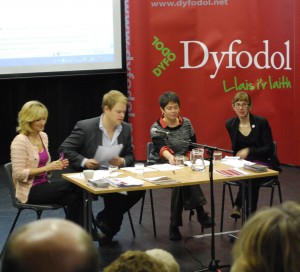